Man of the People, HHS Sec Nom. is another Tax Cheat 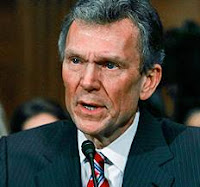 The Los Angeles Times is reporting that Health and Human Services Secretary nominee Tom Daschle (shown in a Mark Wilson Getty Images photo) failed to pay more than $100,000 in taxes and interest until this month when he filed an amended return. The payments and… Continue

Illinois - A Can Of Worms

Service Employees International Union is in the forefront of using funds extracted from workers to promote a socialist agenda. This union is closely associated with President Obama and corrupt political activities in Illinois and other states. Impeached Illinois Governor Blagojeivitch suggested as a payoff for appointing President Obama's candidate to the Senate he would like a $300K per year no-show job… Continue If chutzpah is begging for mercy as an orphan after murdering one's parents, then President Barack Obama and Senator Christopher Dodd (Bloomberg photo) together redefined both hypocrisy and chutzpah simultaneously today.

For those of you residing in the Shenandoah Valley near to Waynesboro, Staunton, Harrisonburg, and Lexington, I invite your attention to the launch of a new newspaper, The Valley American - www.thevalleyamerican.com . The premiere issue states it “strives to bring….local, state….news….from a conservative perspective.”

To my friends at the RPV Network and for those that are not yet my friends. The Outreach movement is taking on a life of its own. Besides our own group, there is a group forming in Texas, and other groups are coming to life as we speak in Colorado, Ohio, Florida, and Arizona. My idea is to expand the outreach program for the whole nation. Many people may be opposed to an Outreach strategy for some reason; they may think that we don’t need it or maybe that the outreach is something bad (there… Continue

Annoying Cartoons For Your Disapproval

HR-1 entitled the ?American Recovery and Reinvestment Act of 2009 passed the house this evening. (If you are insomniac you can read access and read the bill as passed here.) (pbs.org photo)

The purpose of the bill we are told is to stimulate the economy immediately or very soon. One would presume in this decade. A… Continue

Constitutional Convention NOT for Virginia

There is a movement across America to call a Constitutional Convention. Many states have opted to do this and some have rescinded their yes vote realizing the impact a Con Con would cause. However, under Article V of the Constitutional, there is no provision for a rescinded vote; so the vote stands. There are currently 32 of the 34 states needed to call a convention.

Virginia is now on the block with Senate joint resolution #315, the bill from Hanger… Continue

Readers may recall President Obama's nominee for Attorney General, Eric Holder. He was involved in arranging the pardon of criminal Marc Rich, an act described by FBI Director Louis Freeh as a corrupt act.

Look Stuff Up And Become A Better Republican

Again, I bring you attention to the live Virginia General Assembly “doings” that will resume tomorrow. The key to turning Virginia “RED” again lies in this body and that of your own local government. Forget the national scene. You’ll just get a “bad stomach”.

Concentrate on how you can help capture a solid majority in the General Assembly and your own local government in those cities and counties that have a reasonable chance come November. It’s the way forward.

Too Many Wooden Heads?

Virginia State and Local Government needs to get out of competition with Commerce, Charity and the Individual's Rights and Responsabilities and reassume their oversight obligation to be an honest broker in order to remain competitive.

For instance, the State of Virginia is competing with Banks as a source of investment in our communities often dis-incentivizing development that creates efficiencies such as paying for Metro and existing road structures thru density. Through… Continue

To Be Or Not To Be

Instead of blowing hot air at one another about “degrees” of what is or makes a “good” Republican, or who is inclusive or who isn’t, or who should be or shouldn’t be, or how far to the center or to the left or to the right the “elephant” should lean, why don’t you take the time to read and study the 2008 Republican Platform. Find out what you support and what you don’t support and then work within our Party to change it to your liking. If you can’t improve on it, then, within your abilities,… Continue Lawrence Summers, Director of President Obama's National Economic Council (shown in MSNBC photo) appeared Sunday morning on NBC's Meet the Press. He was pressed by David Gregory over the size of the economic stimulus package and how these efforts would benefit the economy. Mr. Summers, who was fired from his last gig at Harvard University for making politically incorrect… Continue

affirmed his support for a woman's "right to choose."

As we previously reportedPresident Obama has included rescinding… Continue

Obama's going to make her rich!

Play this video until the very… Continue