Time Magazine Finally Does the Right Thing by Changing its Name Lord please help me understand the error of my ways and shine a light unto the path I should follow, for verily I have been declared a "Right Wing Extremist"! I know not, what beliefs of mine have provoked such provocation, I can only recite them and pray for your divine light:

Botetourt County’s Republican Committee has passed one resolution supporting the tea parties and a second resolution voicing its support for state sovereignty.

Amy announces (but it isn't what you think).

With Iran's president Mahjmoud Ahmadinejab as the key note speaker, the World Racism conference has again thankfully come to an end. The Associated Press reports that Navanethem Pillay, the U.N. High Commissioner for Human Rights has declared the conference as a success. The standard for making such… Continue

Maybe 3 Nov Will Never Come? But Don't Count On It!

Fan The Fire With CJ and Tallulah

Join us as we speak with Jacquerie, the well known W.A.M. Strategist and Barb, popular blogger of Faultline USA and TSUNAMI MEDIA Coordinator
TOPIC: We are soon releasing a major… Continue 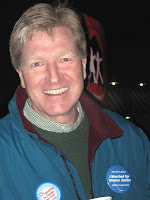 Fred PAC is pleased to announce the endorsement of
Ken Cuccinelli for the Republican
nomination for Attorney General. In a letter from Senator
Fred Thompson sent yesterday, Cuccinelli is named the person committed to First
Principles and core values.…

A Not So Special Relationship

A NOT SO SPECIAL RELATIONSHIP
I’m no fan of Gordon Brown but then again who is? The Prime Minister of Great Britain is starting to look more like Nixon every day. But, give him credit and he proves patience does pay off as he now holds office in Number 10 Downing Street after years of wrangling with “Call me Tony” Blair. Like him, loathe him or ignore him Gordon Brown deserves better than the treatment dished out by the Obama Administration.
As a dual American/British citizen I will,… Continue

During testimony about the current situation in Pakistan to the House Foreign Affairs Committee Wednesday, U.S. Secretary of State Hillary Clinton warned that the country's fragile government is facing an "existential threat" from militants who are now operating within a few hours' travel of the capital according to an… Continue

A Letter to ABC about "The Practice"


My name is Jim Neugent. I wrote to ABC (on-line) concerning a program called 'THE PRACTICE.' In last nights episode, one of the lawyer's mothers decided she is gay and wanted her son to go to court and help her get a marriage license so she could marry her 'partner.' I sent the following letter to ABC yesterday and really did not expect a reply, but I did get one.


My original message was:

ABC is obsessed with the subject of… Continue

Take An Interest In The Interest

Don't forget why we are fighting

This is the reality of what our troops face. So please to save our troops help evryone know what they face in the war.

The site is www.moveabove.org
-again not for kids -but the truth. Call your reps. tv and papers and tell them to stop attacking the troops.


the site has graphic photos of the terrorist atrocities. That allows folks to opt out rather than be shocked or surprised.

Help save our vets please

If you think that there was no need to fight the terrorist you must wake up-
This is a site that is not for people uder 18 -warning only for adults -go to www.moveabove.org

An AP story Tuesday evening is headlined Science taking backseat to cost in climate change. The article reveals that Congress may consider the cost of proposed legislation to reduce greenhouse gases through massive tax increases on energy production. Nothing about science is… Continue