How Far Would You Walk For Freedom? Roger Kress, 55 years old from Guntersville, Alabama is a freedom loving man with a mission, T.E.A.M America Freedom Walk 2010. His mission is to raise awareness in the spirit of freedom and the constitution. He is approaching the Virginia border town of Bristol and on his way to Roanoke and then Washington, DC. 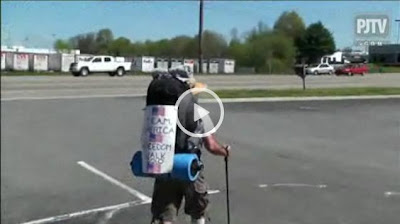 October 5 Deadline for Military Voting in New Jersey & Virginia ARLINGTON, Va.– Monday, September 28, 2009. The recommended mailing date for absentee ballots for this November’s elections in NJ and VA from deployed military personnel is October 5 – less than 1 week away. The Federal Voting Assistance Project recommends that service men and women on deployed Naval vessels or in Afghanistan ...

This was my first time attending the Candlelight Vigil at the Vietnam Veteran's Memorial, "The Wall", in Washington D.C. Like others attending the vigil we did not know what to expect. I hope I can give a summary of what… Continue

Thoma Paine on to Washington

Well, I think Virginia has awoken!

On 27 Feburary 2009, numerous Tea Party's were held around the nation to rally against the now famous TARP and Stimulus bills passed by Congress, much to Americans distaste for them. Now the results of the medeling of Congress are starting to be revealed, Virginians statewide are starting to question these decisions and their implications on not only on our state but on our country and its future.… Continue

Two Virginia sites I know of include:
Richmond…
Continue

First of all a great BIG Thank You to J.P. Freire the father of numerous NEW community organizers. Good Job! Visit the cause at New American Tea Party!
Scenes from the DC Tea Party on Feb. 27, 2009, at which hundreds of citizens rallied in support of free markets and limited governments - and against endless…
Continue

How I choose to acknowledge Bush: 'Sanctity of Human Life Day'

Looking back on the Bush Presidency, I truly acknowledge all the people who helped elect President Bush. It does not take much research to see the magnitude of this issue and how it is so contrary to not only our Constitution but to what it means to be a human being. Now that "Choice" will be probably given more attention than they deserve in my opinion, I look to find… Continue

Had to post this one for my 4yr grandson. He loves this one - Feeding the lambs… Continue

The Select Committee on Earmark Reform will be supported by a website, located at http://earmarkreform.house.gov, allowing citizens to submit comments and suggestions for reforming the earmark process in Congress.


- www.bobmcdonnell.com is Official Online Home of the McDonnell Campaign -

Richmond- The McDonnell gubernatorial campaign launched its new website for the 2009 campaign today at www.bobmcdonnell.com… Continue The Next Governor of Virginia!

The Commander in Chief