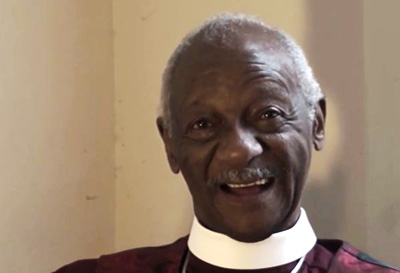 My 87 year old black preacher dad phoned me from Baltimore Maryland at my home in Florida. Dad spent the day at a conference for Baltimore City Fire Dept chaplains. Dad chuckled that he received a round of applause at the conference for being the oldest active chaplain in the state.

Later this month, Dad is scheduled to be the keynote speaker addressing new recruits into the Baltimore fire department. He mentioned seeing a recruit outside of the conference wearing a fire department t-shirt while holding a can of beer. Dad learned that the recruit also has a habit of being late. Dad said such behavior was not tolerated in his day as a young firefighter. He lamented the decline of department standards.

Dad's church is a beautiful historic building located in a Baltimore black ghetto. Dad attended the funeral of the grandson of a couple who are members of his church. The slain 17 year old black male lived with his grandparents. He was shot multiple times and killed in a battle between black drug dealers.

Baltimore, Chicago, Washington DC, New York and numerous other cities controlled by liberal democrats are hotbeds of blacks murdering blacks, despite super restrictive gun laws. http://bit.ly/1R6NF8y Blacks are murdering each other in epidemic record breaking numbers. http://bsun.md/1mVGnJo The Democrat party and mainstream media are doing black Americans a huge disservice by keeping this truth on the down-low. For shameful self-aggrandizing political purposes, the Left continues to further the lie that the biggest threat to young black males is white cops.

Months ago before his death, the young drug dealer was shot in the leg and bragged about it as if it were a badge of honor. Dad prayed with his grandparents that the boy would change.

Dad said the funeral was outrageously lavish which he learned is called Ghetto Fabulous. The coffin was mahogany on the outside lined with silver inside. The corpse was dressed in a white shirt, white pants and $1700 white tennis shoes. The coffin was paraded through the ghetto neighborhood on a carriage which looked like glass, pulled by two white Clydesdale horses driven by two white guys in top hats. After parading the neighborhood, the coffin was transferred to a standard funeral hearse.

Everyone in the neighborhood knew the funeral was funded with drug money. The murdered young drug dealer lived in a house behind Dad's church in the ghetto with his grandparents. The elderly couple could not afford to fund such a spectacle for their grandson.

A woman who lived two doors away from the slain young man said she would not shed a tear for him, but felt bad for his grandparents. She said she found a gun with a loaded magazine under her front porch. The woman turned the gun over to the police. She said the now deceased 17 year old slashed all four tires of her car. She knew it was him because he came by her home taunting her, rapping about what he did to her.

Dad said the funeral and everything connected to it was very disturbing. Other than the day of his church's weekly outreach of handing out free meals, he cannot get the local street people anywhere near hearing him preach. After praying about it, Dad felt led to get out of his church and into the streets. He decided to walk the neighborhood around his church with a sign that read, “Stop the Killing.”

Dad said they stood in a circle holding hands and praying. A uniformed female black cop pulled her police car over to check out what was going on. She said, “Go ahead and pray, I got your backs.” Thugs joined Dad's prayer circle, laughing and making fun of them. Dad said by the end of their prayer, he saw a few of the thugs wiping their eyes.

Dad is extremely excited and plans to hit the streets again next week. Please pray that God will keep my dad safe out there on the mean streets of Baltimore.